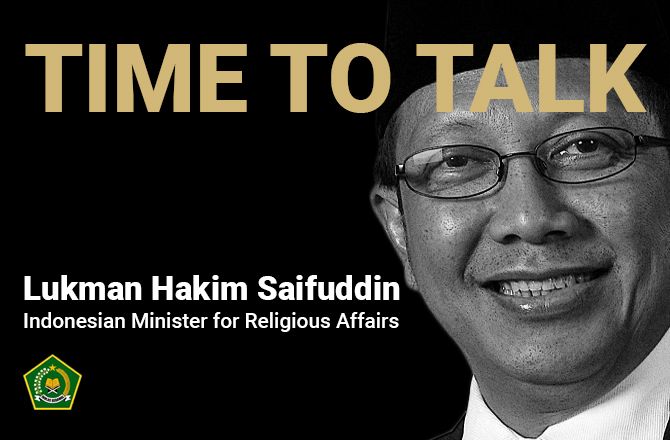 There is a push now for making it mandatory to teach the Pancasila principle in Indonesian schools, how would you describe the importance of Pancasila for Indonesia?

Pancasila is very important for a non-homogenic society such as Indonesia, which is very diverse. Pancasila is an ideology which everybody is committed to regardless of religion, ethnicity or political party. All of religious society in Indonesia can be integrated into the 5 pillars of Pancasila.

The term ‘Unity in Diversity’ is the national motto of Indonesia and is in line with the pluralistic Indonesian society that has 6 official religions. How was the ministry contributed to interfaith peace and unity?

Within this pluralistic world of society and religion in Indonesia the Pancasila teaches to stand up for justice, to defend human rights, not to steal, not to kill:  so actually the essence of Pancasila is in line with all the various religions in Indonesia.

Currently there is talk about a more modern Islam, what your vision for Islam in Indonesia?

For centuries not only Islam, but Christianity, Buddhism and Hinduism have been moderate religions. That’s why the ministry of religious affairs is working closely together with the community base to preserve this moderate status and to be part in society: with digitalization and globalization there is a proliferation of extremist messages from abroad which is coming to Indonesia and try to paint religion as black and white, trying to force others into one color or the other. The Ministry of Religious Affairs tries to moderate this and to work together with moderate groups, such as Nahdatul Ulama, Muhammadiyah and others with the view that religion is not just black or white.

I read  somewhere that you are demanding religious teachers to be certified. Is this how you will monitor and make sure that everyone is moderate in their preaching and teaching at universities and mosques?

For example, when you build a mosque in Indonesia, as opposed to other Muslim countries, where they are built, subsidised and managed by the government, in Indonesia most of the mosques are funded independently so the government has a very little influence in their building and ownership. However the important role of the ministry is to make sure that these mosques that have been built independently will still teach moderate Islam. The Ministry has already created a set of 9 rules how to deliver the sermon inside a mosque so it will be moderate. This covers all religious buildings, so is applied to churches and temples as well. Because of the process of democratization in Indonesia we have to remember that this year and in 2018 there will be a lot of municipality elections and in 2019 we will have the parliamentary election together with the presidential election. Those leaders who are using religious houses to espouse political views need to be stopped. That’s why 2 out of the 9 principles forbids political leaders to use religious buildings to host campaign speeches.

As the nation with world’s largest Muslim population, how would you like to see Indonesia being portrayed abroad and how should the readers of Time magazine see Indonesia?

The key message is tolerance. Because we are living in a pluralistic society, we need to stand for that. Only recently the influence from abroad has made people see things differently, one party against another party using religion as a tool against one another.

On the other side of the world things are seen as black and white and that it is necessary to pick your side: black or white. We as Indonesians are trying to teach that you can be of any faith but the most important thing is to bring prosperity to the people.