Minister on why Paraguay is Latin America’s best-kept jewel. 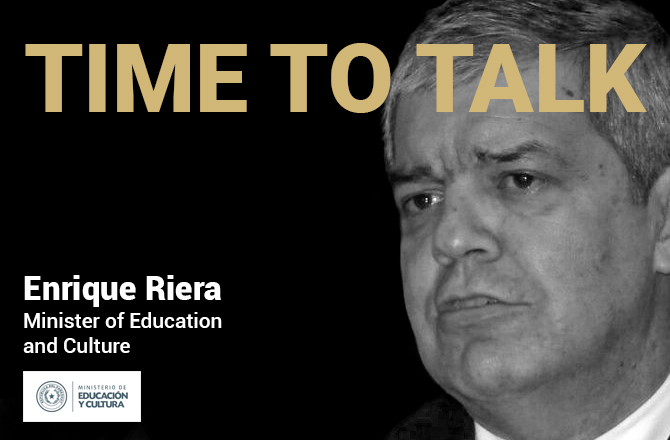 A short reflection of his family’s history:

Riera´s father, who was of Spanish origin, fled into exile to Paraguay in the period of the Spanish dictatorship, fighting for democracy and freedom in the 50s. On his passing in 2005, all flower shops in Asunción were left empty for the vast quantities of flowers and ordered in his name. His grandfather was an Honourary President of the Supreme Court of Justice, President of the Law College and President of the Central Bank of Paraguay: one might say that the family has a profound history in Paraguay.

The Minister, at 57 years, just like his father, is still continuing the fight for an improved education system in Paraguay, ending the interview with the words his father passed on:

“ One day in Paraguay, dignity and integrity will be profitable.¨

What are the measures that were adopted to change the current situation in the education system and solution towards the causes of the student riots?

In the end, the student rebellion converted into a rallying cry and, thanks to that, we were able to plant education at the center of the national agenda.
Previously, the priority of the educational reforms was to expand its range, while now the challenge lies in the quality of the education system. To this end, we have set aside US$120 million to develop 3 projects in the 700 days which lie ahead for the ministry.
We are setting out US$67 million for our first project, which consists of the renovation of the school structure through the creation of model schools and schools with dining facilities, with 24-hour broadband accessibility, mixed restrooms and all the required development.
The second project is concerning the training of teachers. We are arranging to prepare 50,000 teachers through various measures. The third project requires an investment of US$6 million, which will be used to incorporate technology in classrooms.

How much is the Government investing in the education sector?

The spending recommended by UNESCO is 7%. When I entered the government the spending was 3.9%. The government’s commitment is to reach 7% by 2018. Our budget for this year will be close to 5%. We will see if we can put up with the budget and the finances of the country but I will put on the table what the government needs.

What are your thoughts on “Garage Universities”?

There was a moment in which I understood there was irresponsibility in a few sectors of the political class, who passed laws allowing the creation of universities without any control for quality. This law authorised the universities to choose their own programme and subjects. This brought us to such an extent of chaos that 54 universities have been created, 27 of them in a time period of 4 years.
The Ministry of Education can’t intervene directly in the universities’ affairs, as they are protected by the autonomy of the institutional constitution, however it can intervene through the CONES (Consejo Nacional de Educación Superior, in English the National Council of Higher Education), where the Ministry plays a vital role and through these means have been able take several measures.

One of these was to inhibit the delivery of titles until we found out the origin of the university, and the other was to intervene in all the Garage Universities with tough sanctions. The Ministry is also supporting the students in reporting these cases and trying to get them gain compensation for the harm caused. The Ministry also offers them the possibility to take an exam to validate their previous exams and therefore demonstrate their understanding and learning in order for them to receive a university degree from a prestigious university in our country.

Despite what happened with Garage Universities, in Paraguay there are prestigious and important universities, what are you comments?

There are universities with a lot of tradition and excellent curriculums, with demanding evaluation systems and professors of high quality. These are the recommended universities.
At this moment we are signing an agreement with the University of Georgetown with the purpose of doing a study and discussing the recommended route to follow in order to solve the current issue. Additionally, we aim to elaborate a ranking of national universities so that everyone can know what to expect.
From my mandate we are taking measures to guarantee the deserved educational quality in every university throughout Paraguay.

We know the importance of human capital in every country, but we need to highlight the high demographic surplus that exists in Paraguay. What are the advantages?

Paraguay has a demographic advantage, 58% of the population is younger than 30 years old. This is no doubt of great value. Our ministry has the commitment to provide the right training so that this young population can take the country beyond its expectations.
There have been scholarships under the Carlos Antonio Lopez programme. These scholarships have been sending 1500 students abroad with the commitment of coming back to work in Paraguay for at least 5 years. As of now 650 graduates have been sent with the aim of finishing their masters or PhDs. The program celebrates a year of success: 650 scholarships and the revolution of education in Paraguay.

Why should international investors come and invest in Paraguay?

Paraguay is a country of possibilities. Seeing the effects of recession in our region one understands the strength of our economy. For the past 14 years we have been growing, and in the deepest moment of the crisis our region has been growing at 3%. To keep growing in an unfavourable environment is much more difficult than in more prosperous circumstances.
Paraguay enjoys macroeconomic, fiscal and political stability and is improving its legal framework, which are the three pillars that attract FDI. Furthermore, if you consider that we have water, clean energy, a young workforce and we are a country safe from crime and natural disasters, you could easily say that Paraguay is Latin America’s best-kept jewel.