Paraguay: A country teeming with the potential of youth 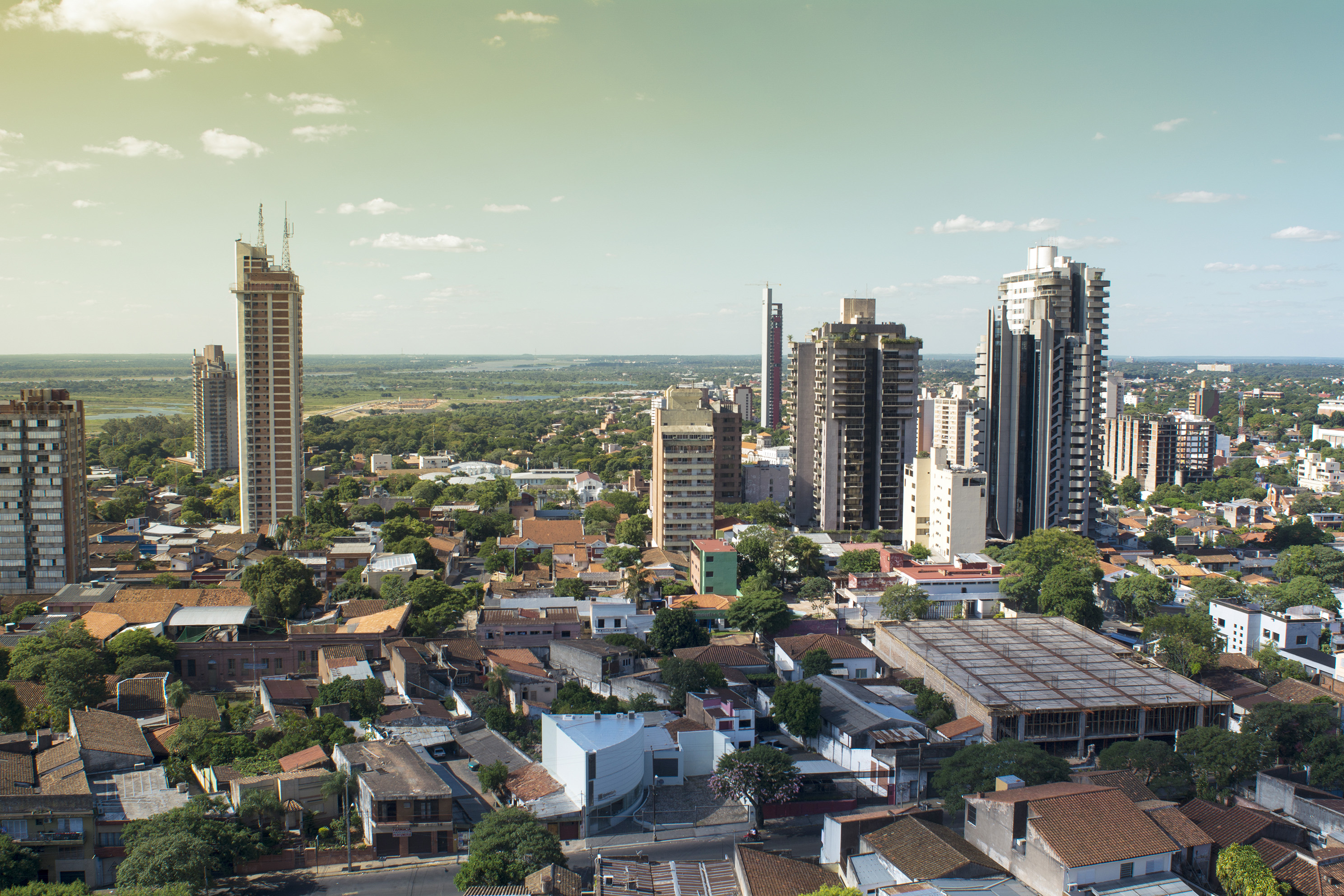 In the heart of South America, Paraguay has long gone unnoticed, sandwiched as it is between the region’s two great economies and tourist destinations – Brazil and Argentina. Shadowed by imposing neighbours, it has not historically been a hub either commercially or in terms of tourism, but this fledgling democracy is looking to the future with the confidence of youth.

Youthfulness will prove to be a defining characteristic of the Paraguay of today: roughly two thirds of the country is under 35 years of age, and the drive and ambition with which this young population step into the future will play a huge part in deciding the course which the country takes. Daniel Elizeche, President of Paraguay’s American Chamber of Commerce, in an interview with Voices of Leaders, stressed the importance of training this vast youth to the country’s development: “For the most part we have an unskilled workforce which has distinguished itself only through capability and work-ethic.” Elizeche professed tremendous faith in the country’s prospects, going on to say that “the country has enormous potential for the future.”

“ For the most part we have an unskilled workforce which has distinguished itself only through capability and work-ethic.” Elizeche professed tremendous faith in the country’s prospects, going on to say that “the country has enormous potential for the future. ”

Instrumental in equipping young Paraguayans for the progression they are expected to drive are the country’s universities, of which the Catholic University of Asunción has distinguished itself while bringing into the educational sector a confessional element and spreading the values of the Catholic faith throughout Paraguay – it now boasts 16 campuses and close to 25,000 students. Its widening scope places on it much of the responsibility for Paraguayan advancement, and Narciso Velázquez Ferreira, Rector of the Catholic University, takes this responsibility seriously: “We are a university that demands presence and commitment: dedication from ourselves, the professors, and the students. We have an admission course and a scholarship programme. As a rule, 75% attendance is required in order for the student to retain the right to be evaluated and pass his or her degree.”
Father Velázquez tells us of the university’s role in the national push to bring Paraguayan education up to international standards: “We are heavily involved in the country’s process of revision and updating higher education with the criteria accepted internationally. For this reason, we are really committed and trusting of the new accreditation process.” Alongside these efforts, the university has also developed partnerships with internationally renowned institutions: “We are testing academic and student mobility, while encouraging both our professors and students to gain experience abroad. We have partnerships with some very reputable universities, such as Harvard.” 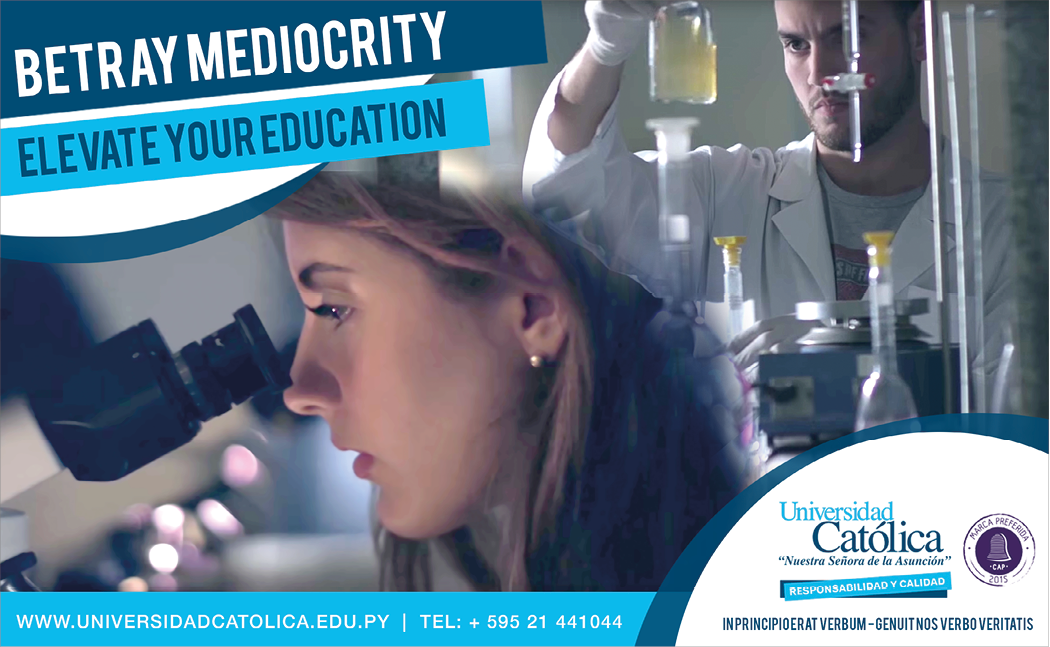 The university has also demonstrated a commitment to inclusiveness, knowing that the country must not only be shaped by those already possessing wealth: “Although we are a private institution and we do charge tuition fees, we also offer great scholarship plans. Roughly 8% of our budget is dedicated to our scholarship plan.”
Asked for a message to send the youth of Paraguay, the father puts the onus on his students: “Look for the opportunity to study. They should ask for what they have the right to: a fair education and an honest presentation of science.”
Paraguay has already experimented and seen success through innovation. In October of 1995, when the country’s retail sector had an entirely different aspect, Paraguay’s first shopping centre – Shopping del Sol – opened its doors. General Manager Gabriel Giussani told us of the mall’s beginnings: “When the location of Shopping del Sol was discussed, there was a lot of scepticism. Only time has shown that it was in fact a well-thought-out plan. As in many other places, growth has been created by the existence of this centre of gravity which, in the case of Asunción, is the airport, and we therefore decided on Avda. Aviadores del Chaco.
“Nowadays, 25 office complexes exist, as well as real estate developments above Avda. Santa Teresa. This gave us the impulse to grow and even increase the space available within the mall.
The opening of the new section of the mall is planned for the last quarter of 2016.” Plans for this development went ahead and, in November of last year, the expanded portion was unveiled and opened for business. Shopping del Sol’s innovation sparked the opening of several imitators throughout Paraguay, revolutionising the country’s retail industry and making it a leader in the region. Giussani tells us of the way in which it continues to stay ahead of the competition: “Fortunately, its focus is not limited to [higher-income customers]. Within our expansion, we want to continue with the same mix of brands that we currently offer.”
“Looking from a commercial perspective, we have brands which have not even arrived yet in Argentina. We do therefore have something unique to offer and we want to leverage that.”

Aware of the limits of the domestic market, Giussani’s message in order to generate growth is to look outward: “We have a relatively small economy along with a small population. What needs to be emphasised is that sustainable growth can be achieved by attracting the people of the region.”
Attracting people from within the region will indeed be essential to Paraguay’s development, as tourism remains the country’s most significant untapped industry. South America’s tourism boom at the turn of the last century, which from 1996-2006 saw international tourism nearly double in Argentina, Brazil, and Chile, largely passed Paraguay by. Still transitioning into a stable democracy, the country struggled to attract in the same way, but with the number of young travellers to the region continuing to rise there is enormous potential for Paraguay to carve out a prospering tourism industry for itself. It has, in fact, begun to do this already in recent years: 2015 saw a 94% increase in tourists from 2014, reaching 1.28 million, and indications are excellent for continued success.

“We have a relatively small economy along with a small population. What needs to be emphasised is that sustainable growth can be achieved by attracting the people of the region.”

In conversation with Verónica Fois and Gladys Victoria López of TerraNova, one of Paraguay’s major tour operators, they outlined Paraguay’s unique charms: “Paraguay has always been the great unknown,” says Fois, the company’s Commercial Director, “but when people come here they fall in love. The moment you land in Paraguay, you breathe in the local hospitality and the affection of its people.” Famed among foreign visitors, the welcoming nature of the Paraguayan people is often cited as the country’s distinguishing feature by visitors and Paraguayans alike. The grace and charm of its population, however, is not the only thing the country has to be uncovered.
Victoria López, TerraNova’s Administrative Director, tells us of the potential in Paraguay’s Chaco region: “Is quite unknown and must be promoted.

“We are proud of our country and we know that we have a lot to show off. We must learn to better sell ourselves, because Paraguay offers much in terms of growth, especially to the tourist industry.”

It is a stunning destination in terms of the diversity of its flora and fauna. Once it has better access and improved infrastructure, it will certainly become a huge attraction for tourists.” The Chaco region is part of the Gran Chaco plain, one of the world’s last great expanses of wilderness, which spreads across several countries. Teeming and untamed, this priceless swathe of natural riches has not, as yet, been capitalised on by the Paraguayan tourism industry, and awaits the investment necessary to bring it to the world.
TerraNova’s directors are both enthusiastic about the future for both Paraguay and its tourism industry: “We are proud of our country and we know that we have a lot to show off. We must learn to better sell ourselves, because Paraguay offers much in terms of growth, especially to the tourist industry.”
Nor is Paraguay’s tourism industry a one-stringed bow, as is demonstrated by the success of complexes such as the Paraguayo Yacht Resort and Golf Club. This resort, as well as being a luxury getaway for private tourists, has become a regional leader in the area of commercial tourism. Hosting corporate events such as the Paraguayan Institute of Accountant’s Summit of the Americas 2016, it has distinguished itself as an outstanding venue. General Manager Pablo Damato describes the reaction to last year’s event: “The feedback has been very rewarding: both the organisers and participants were really pleased with our services. 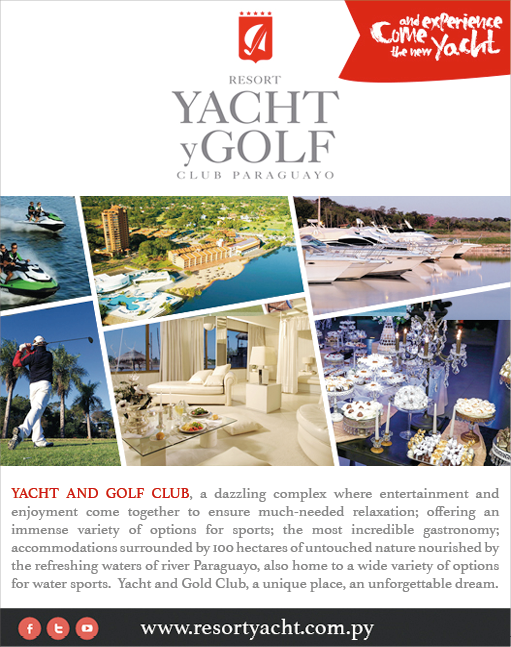 “They loved having everything in one place – nature, luxury, comfort, and excellent gastronomy.” When Damato says “everything in one place” he means it: the resort boasts, in addition to its titular facilities, a comprehensive range of other sports facilities, two restaurants and snack bars, as well as meeting rooms for corporate functions. What makes the Yacht Resort unique, he tells us, is that it is “the only complex that can, in addition to hosting nearly 450 passengers, accommodate a further 2500 in carrying out congresses, conventions, and fairs between the many event rooms it has available.”
It is evident that in some areas the country is already well-equipped to meet the demands of growth in tourism. Asked what he thinks should be done to boost revenues from tourism, Damato is decisive: “SENATUR’s priority should be to create, in partnership with a recognised consultancy specialised in marketing tourism, a marketing strategy for promoting Paraguay.”
In talking with those leading Paraguay into the future, the optimism in their outlook is infectious. With the exuberance of youth, and with youth’s fresh and creative outlook, opening its doors to an influx of tourism and investment from neighbours which once overshadowed it, the country can expect a bright future.