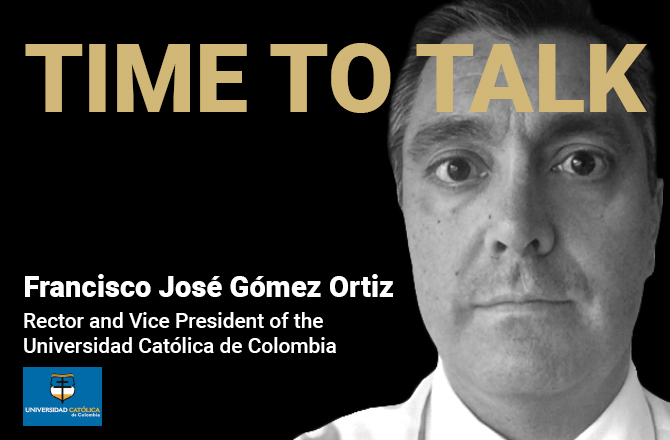 What is it that makes the university’s approach to Higher Education so unique in Colombia?

In 2014, when the situation in Colombia had improved, as a young businessman and professional with a Spanish wife, we decided to go to Spain, IBM gave me this opportunity, so I went. But then I heard what everyone was saying here in the country and I believed it was a second wave of internationalisation. This country has developed differently from other countries that develop from the coast inwards…Colombia has developed from the mountains to the coast…it’s practical.

I always wanted to return, I was given the opportunity of coming back to the university and I wanted a change of scenery, I was tired of the commercial industry with its objectives and goals and targets. So I was able to use my business experience in the university, this is one of the unique elements of Higher Education in Colombia. I also thought that coming to the university would be more relaxed, but I was wrong, relaxed nothing! There are all types of drama here; it is like a micro-government.

Tell us more about the adaptation of the private sector in terms of universities here in Colombia.

I’m going to give you an analogy, if you were to go back to a university in the 17th century and then go to the 20th century, I bet you wouldn’t find much difference. The university sector although it is supposed to deal with knowledge and development, are organisations which are really unwilling to adapt and change, they are unwilling to change the structure, they are very hierarchal. When I arrived, I had a doctorate, I had to get one because if you do not have a PhD, you are not respected.

You realise that they are very hierarchal institutions that are very inbred in many respects and when it comes to internationalisation they are very closed to change, very competitive amongst themselves although we are all on the same side. At the end of the day we look after ourselves, and our own world. Then the second question that hit me hard, because of course I had worked in the technology sector and everyday had been dynamic and different. So in terms of internationalisation: working in Madrid, talking with Milan, London, New York…and here you speak within the office and then begin to ask yourself: What exactly is internationalisation? What is it for?

Therefore, this is the biggest critical question posed to universities: why are they not the ones making the change? It’s one of the questions that our colleges and our middle class universities with limited resources have to start looking at answering. In the last 7 or 8 years Colombia has been stuck in the same place. Colombia has two interesting things that I can see: first it is a nation of nations, Colombia is the melting pot of Latin America. What I mean to say is that here you can find the rainbow of South America: you have the Caribbean, the heights of the Andes, the Amazon, the Pacific. It is however also a country with very difficult terrain to develop.

There are two sides to this question. Colombia is a window into the Latin American market. The public and private sector are allowing it to develop. In the education community, almost 50% is covered by the public sector and the other 50% is the private, we are living with this model. That model exists within non-profit organisations and the country has benefited from this because it has allowed these universities (speaking on behalf of the Universidad Catolica) to devote all of its resources to the university. I think that non-profit organisations are not that attractive for foreign investment in Colombia, because it has obvious limitations, but we have devoted our resources to the foundation and its development and you cannot then take from the hands of the people, individuals and other organisations.

I think in education, we are also afraid of these players with a lot of money to invest in education, which is not a bad thing, I think that money is for the benefit of education, so I welcome it. The problem for me is that there are still lessons to learn. Here, now there are argument that do not make sense: private is bad, and public is good while anything non-profit is sacred.

For me, the only thing that the country needs to do is for the Colombian State to promote quality. For the quality of institutions, I have to say that the Colombian State has been helped to modernise with some risks. What I mean is that there has obviously been new, rigorous legislation that gets tougher every day, there are laws ensuring a higher standard and better quality.

The current system is of much better quality and has improved greatly as a result of a change in the parameters. The State has helped us to make that change, although it was not that we did not want to change internally, it was the State that said: you need these points, and if you don’t adapt to them, that’s it: you’re gone. This is the positive side of it.

The part that I view as being complicated is how we aim to finance education in the medium and the long term. The country has a very big challenge, while at the same time great opportunities. The big advantage is that it is education,

Colombians in general, whether for underdevelopment or historical reasons, have always viewed education as a way to move forward and succeed.

How do you go about promoting further alliances and collaborations with universities abroad, what is your impression of this?

Here we have the issue of internationalisation. Our students do not have a very big economic base, they don’t come from a wealthy background where they can finish their studies and easily go and study in the US or Europe. European countries (France, Spain) have many possibilities for people of limited resources in Colombia to study abroad. so, what is the big deal? How does one stay in Europe? You may not have to pay the university in Salamanca, but you actually have to live in Spain, France, the UK, Germany or the US, it’s very expensive. In this aspect of globalisation, we cannot aspire like other wealthy Colombians and have a great mobility of students; therefore we have to look for partnerships.

So we have brought an Italian university to Colombia. We have had Italian teachers come here for a month to teach their modules and get their Colombian and Italian qualification. Another idea for global partnership that we are implementing is the virtual model. We started this with Spain, the Catholic University of Chile and the Universidad Católica de Avila. For example, in the case of a law student who finishes their studies in Colombia, with an additional  year, they can obtain a law degree from Spain, they just have to take the courses in person or virtually.

We also do not want to have brain drain. The government has to make an enormous effort with grants, and training in the world’s best universities, but a lot of constraints are put on that one person. Often if a talented individual goes to college or university in the US, Spain or the UK, we pay and the student stays there. Most of the people that leave do not stay abroad for economic reasons but for more personal reasons like they often find their soul mate and then do not wish to return. Internationalisation is a great part of globalisation. We often look at sectors, but the theme is education with a theme of development through opportunities given by mobility – we must see this as an advantage rather than a disadvantage. The downside is when, at the end of the day you invest so much in one person to get their PhD (five or six years) and then the person says: I don’t want to go back to Colombia. This is the problem with the developing world in general: how do we keep the best talent?

Institutions and universities have a social responsibility for their graduates, to allow them access to the labour market. That is our contribution: we train people, we are tolerant and they understand diversity, the world and can talk to each other. That will be the biggest challenge in these universities, and it’s nice I can say because we are one of the few universities where students and graduates hire college graduates. We are a university “with a lot of power in public service” because a lot of our law graduates are prosecutors in the prosecutor’s office. They are people who are training for this type of work: our attorneys are litigators. They are people that hire them because their practices are good for their set of expertise.

What would your message be to those looking to invest in Colombia, what are the incentives out there?

The first thing that we have to do to improve the university is to improve the quality of the teaching staff. We need to have a better quality of teacher, and the main investment is in this. Obviously, we are creating new buildings; there is a change in the physical appearance of the university to make it more modern, however if you ask me right now the priority is the teachers. The teachers we are asking for are bilingual because everyone expects to have bilingual teachers right now. This is a stumbling block at the moment, but we are working to improve it.